‘Space of transformation’ is a concept borrowed from Serres’ communication theory and here redefined after the evolution of the post-digital milieu and the materialistic critique of the same. Hackerspaces, fablabs, medialabs and other shared machines shops are defined here as spaces of transformation, places for the encounter between humans and non-humans, where disciplines are bridged together, hitherto severed, giving place to collective practices related to education, production and society.

Shared machine shops are sited locally but also connected globally. Online, they share innovative forms of production, education and collective organization, giving place to a complex ecosystem. This project consists of the analysis of the topology of the ecosystem conducted by means of tracking and visualizing the online interactions between the hackerspaces listed at the platform Hackerspaces.org. The application of network analysis is aimed to answer the research questions: First, how shared machine shops are locally and globally connected? Second, what links hackerspaces among them and these with new social issues? The definition of Hackerspaces as spaces of transformation and the study of their mutual relations allows for an understanding of the transformative capacity of these spaces and how they are related to art, technology and society.

* This is a short summary of the project, to know more see the published articles 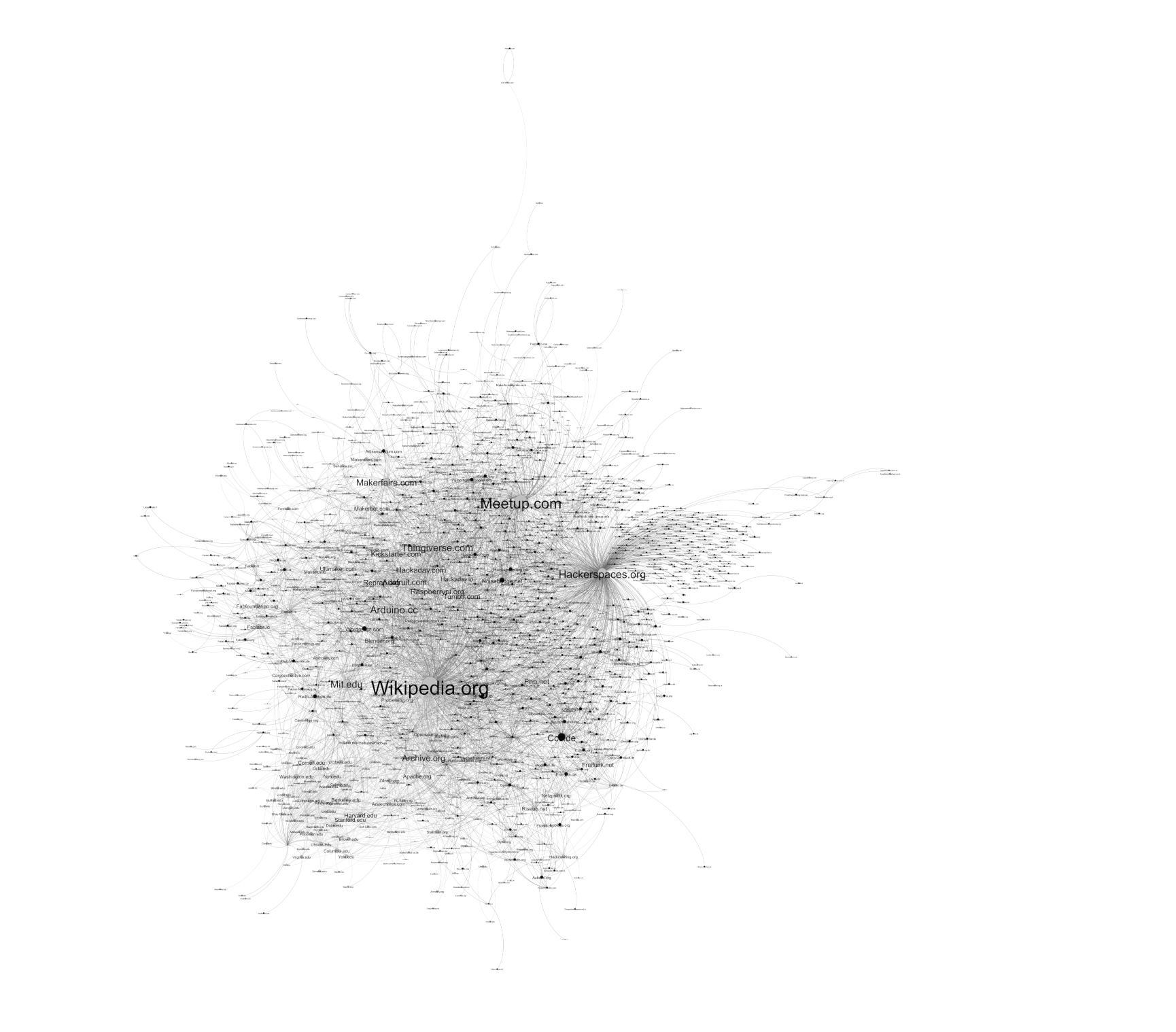 The object of the study

The corpus of this study is constructed by means of crawling the links contained in the platform Hackerspaces.org

Hackerspaces.org was founded in 2007 to be a collective online platform for the hackerspaces and their users. It is a platform that agglutinates available tools for collaborative work as wikis, blogs, RSS feeds, Freenode channels and so on, to improve communication among hackerspaces. In addition, the platform maintains a set of available resources, a user-maintained list of hackerspaces, and sites to communicate events, residence opportunities, ongoing projects looking for collaborators and hackathons. These resources aimed to facilitate the local development of these spaces by means of a
feedback network that shares tools fosters collaborations, and facilitates the mobility of people.

The tools used for this analysis are Hyphe a crawler aimed at community detection in the generic web and Gephi a graphical application for network analysis.

We will consider that the cultural phenomena related to hackerspaces emerge from a topological space, which is not formed by points or identities but as a conglomerate of local spaces and the contiguous connections between them. The
visualization of this topological space will allow to consider this culture in its making and understand a series of questions: how hackerspaces connect between them? Which are the global and local networks that this phenomenon is distributed upon? Are there connections where the history and evolutions of these spaces can be traced? Finally, which clusters are locally and globally formed around specific subjects of research and how they are connected among them?

Global and Local – the geography of shared machine shops

What are the relationships between hackerspaces at the local and global level? To answer the first research question, I proceeded by crawling the list of hackerspaces until deep 1 (this means, only URLs directly linking to the ones contained on the list are retained). After I eliminated all the URLs not corresponding to shared machine shops, I tagged the remaining entities accordingly with the country in which they are located. These operations resulted in a corpus counting 941 nodes. The first graphic features the network resulting from the spatialization of this database.

The first topology shows a densely connected centre surrounded by a concentric distribution of less connected URLs, the nodes in the periphery corresponding to hackerspaces that are only connected to the platform Hackerspaces.org, and not link to other hackerspaces in its websites. Analysing the densely connected centre, there are two big nodes or authorities that stand out, these correspond to the ccc.de (Chaos Computer Club), located in Germany and the noisebridge.net (the
Noise Bridge) located in San Francisco in the US. The two big authorities are surrounded by the nodes from its same country first and in a second moment by clusters of nodes from other countries, belonging to Europe, The United States and Canada, South America, Australia, Asia and Africa.

Concluding, Hackerspaces cluster inside their countries and around some nodes that appear as international authorities for historical reasons.

What other things connect hackerspaces among them? Addressing the second research question requires adding to the corpus the URLs discovered during the process of crawling and not corresponding to hackerspaces. The resulting corpus
contains 1331 nodes classified accordingly their activities. For the classification of the nodes, I established nine groups of tags.

The obtained network appears divided, in the middle we find the node corresponding to the platform hackerspaces.org (coloured in yellow), on the left there are a group of unconnected nodes mainly corresponding to hackerspaces and fablabs. On the right, there is a big cloud of densely connected nodes. The bigger nodes standing out in this cloud belong to tools and services used by the most part of hackerspaces (coloured in light blue). Among them feature the Wikipedia, Meetup, Arduino, Thingiverse, Kickstarter, Archive.org, Raspberry Pi, Adafruit. Other less linked but also important tools
are Blender, Apache, php.net, Makerboot. The links to these websites are indicative of the different activities and projects performed in hackerspaces, also are testimonials of the persistence of a commitment with open knowledge and free software.

Concluding, Hackerspaces and other shared machine shops are connected at the local level between them and with
cultural institutions, like the Medialab Prado and the CCCB in Spain, the ZKM in Germany and Eyebeam in New York, as well as to events, enterprises and projects. These local connections allow the hackerspaces contributing to the transformation of its techno-social milieu. In what refers to the global level, hackerspaces are connected, first, by other
hackerspaces that feature authority due to its history and its contribution in the starting and spread of this movement, second, by means of dedicated platforms that work as hubs for this movement as hackerspaces.org, the fablab foundation, the maker foundation and repaicafe.com, among others. Finally, the shared machine shops also connect
internationally by means of tools, events, big institutions and projects.

The featured analysis has shown the networked evolution of hackerspaces, its origins linked to located gatherings of people and technologies- the historical hackerspaces, nowadays displaying a prominent authority on the network- and its
evolution by means of the progressive incorporation of projects, services, tools, institutions and events into the network. We stated at the beginning that it is precisely this openness and capacity for linking and integrating, what allow hackerspaces a plurality of relations and the transformative potential. Hackerspaces are ‘spaces of transformation’, what is
to say, not-fully-codified spaces, sited in the intersections of other systems where ‘people meet to do things together’. The gathering of people from all walks of life, technological and more traditional tools, needs, purposes and desires in a non-hierarchized space allows for the emergence of novelty. In both dimensions, the production of new things and the promotion of new collectives.

Permanent link to this article: http://enlaciutat.es/wordpress/?p=713